We hear it so often, ‘it’ll never feel like work if you’re doing something you love’. Easier said than done though, right? Well maybe not, as our guest on this episode demonstrates, it can be all about ‘finding your genius’.

Leaving leafy Cheshire for the bright lights of London, Tim Hughes rocked up at what he describes with mischief in his voice as ‘arty-farty’ Goldsmiths, to study drama and theatre. For those not familiar with Goldsmiths, it’s a highly prestigious university, internationally renowned for creativity and innovation, with much lauded graduates that include the likes of Damien Hirst, Lucien Freud,

But for Tim it was what happened beyond the creative campus that really began to shape his career and his future. Internships at children’s TV channel Nickelodeon and family entertainment channel Flextech, introduced our wide-eyed creative to a whole new and fascinating televisual world.

Instantly bitten by the bug for TV and the marketing of TV, Tim next snapped up an opportunity to become a production runner for Paramount Comedy, and it was from here that he discovered the world of TV promo’s, yes, they’re those station intros and ads that we all subconsciously hum in the shower.

Becoming A Success In The TV Industry

‘If you learned how to do something, you could go on and do that. They paid you terribly, but you got lots of experience.’

The ‘kid from Cheshire’ was suddenly immersed in an industry where lots of hard work was balanced with an equal amount of creativity, fun and partying. He was rubbing shoulders with colourful characters, and loving every single minute of it. Amongst those were head of graphics Lee Francis (aka Bo’ Selecta!, aka Keith Lemon), and voice over artist Damien Lewis, who went on to become a massive star in Hollywood, two people who you might say were in the process of ‘finding their genius’.

It was about now that a bigger opportunity came knocking, one that meant taking a big leap, but not one that phased our Tim, ‘when you’re that age nothing phases you’. A job with the BBC, running all of the voice overs for UK TV’s 13 channels meant stepping up to run a massive team of 20 voice over artists, script writers, and the production of 10,000 messages per week!! Easy peasy? Not at all, so how did a young and relatively inexperienced guy get a job like that?

Well, it seems as though two things did the trick, a ‘gobby, I can do this, I can do that, I can do whatever’ interview, and a naively modest salary expectation that made him an extremely cost- effective option.

‘He’s cheap, if he doesn’t work out in three months time what’s the worst that could happen, we just fire him and bring this other person in.’

It was low risk, if it didn’t work out they could just fire him, no problem. But work out it did, so much so that Tim later went on to become On-Air Marketing Director for the Discovery Channel creative team across the whole of UK and Ireland.

Fast forward a year or so to October 2016, head over to the Big Apple, and we find Tim in a very different scenario, this time featuring the future President of the United States, a certain Mr Donald Trump - or at least someone who looked very much like him.

Cast your mind back to one of the most controversial US presidential election campaigns in recent history (and there have been a few), and you might recall the revelations of ‘Pussygate’. Let’s cut to the chase here, the conversation between the President to be and TV host Billy Bush, that featured the now infamous line ‘grab ‘em by the pussy’, was not about their mutual love of cats.

Shockwaves travelled far and wide following The Washington Posts expose of the supposedly private conversation, and immediately set the synapses firing in the fabulous creative mind of British artist and photographer, Alison Jackson.

Known for her portraits, sculptures, films and videos that use lookalike actors to recreate staged but incredibly realistic situations, Alison Jackson’s ‘Real Or Not Real’ imagery captures the famous and the iconic in ‘intimate, often salacious, imagined private moments’. The Queen, Princess Diana, Elton John, nobody is safe (or sacred).

Put this statement-making artist together with ‘Pussygate’ and it was inevitably a case of ‘watch out Donald Trump!!’ Having already portrayed the future President topping up his spray tan and enjoying the company of Miss Mexico for her book ‘Private’, an idea was quickly born. So it was that Tim, already helping with the launch of the book, found himself also providing marketing and PR support for ‘Get Your Hands Off My Pussy’.

The plan was for traffic stopping stunt that would involve driving ‘Trump’ down New York’s famous 5th Avenue in an open top stretch limousine, accompanied by a troupe of placard wielding strippers, before winding up at Trump Tower. ‘OK, we’re all going to jail’ was Tim’s first thought, but you know what, the press love Alison and this was a chance to have some serious fun whilst making a powerful political statement. 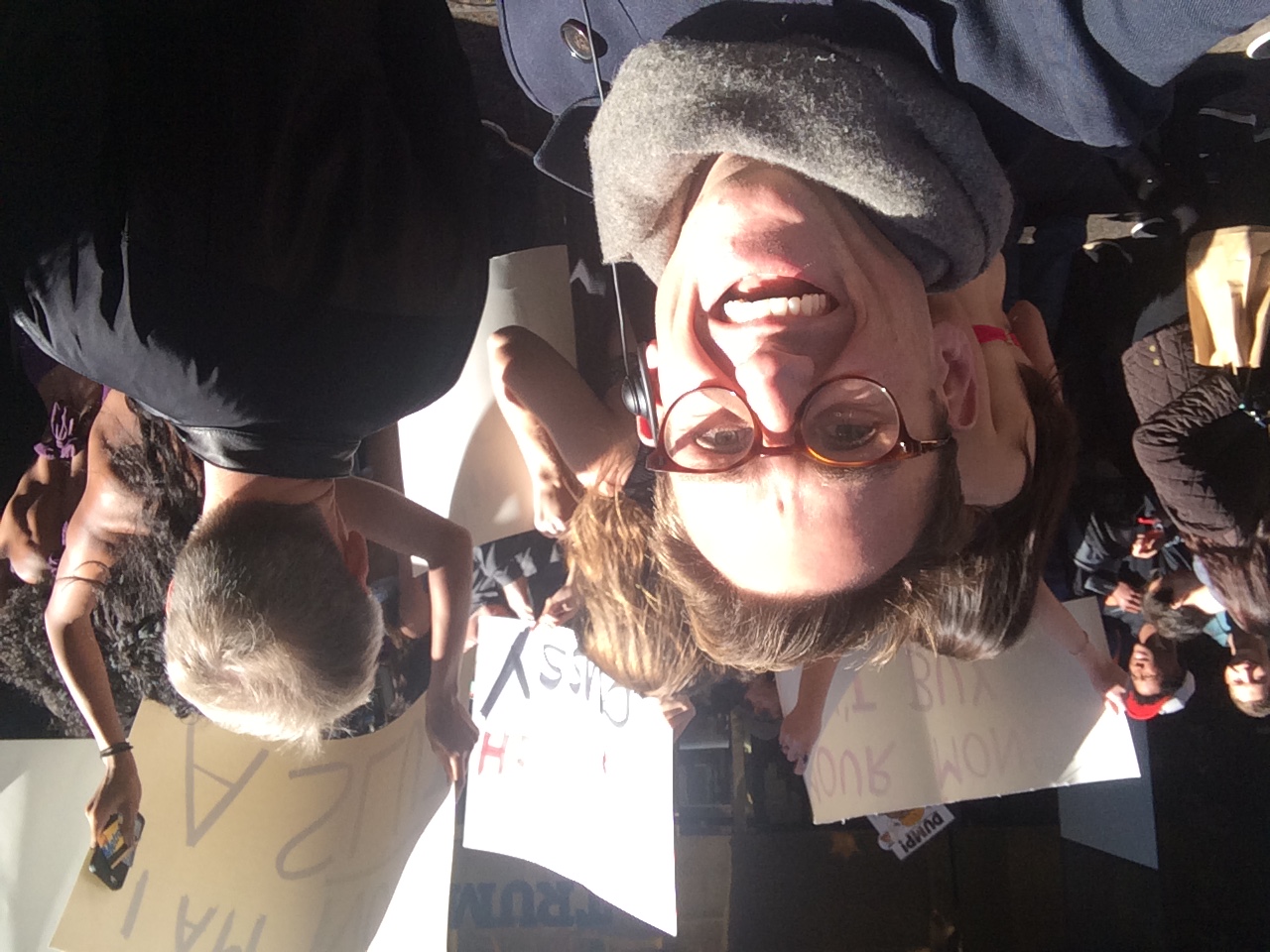 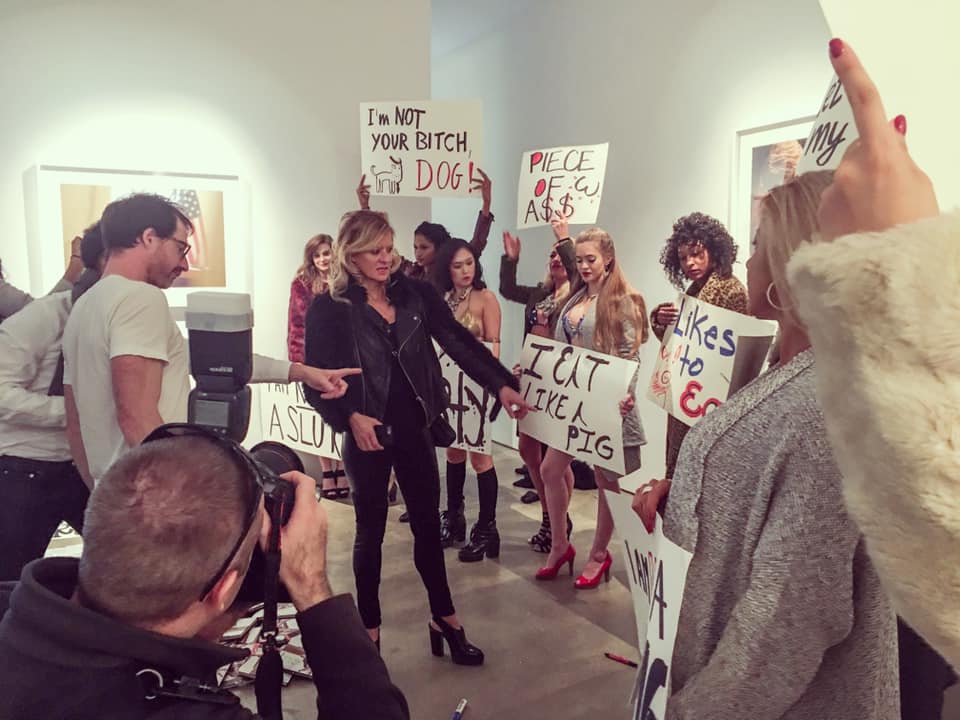 ‘I had to get two credit cards with £30,000 on, because that’s what lawyers told me it would take to bale three of us out.’

A shout-out on various websites announcing a casting for the stunt, aiming to get maybe ten or so women, resulted in literally hundreds who wanted to play their part in saying ‘our pussy’s are not up for grabs’. An army of women all came down to the gallery, and Tim’s next task was to manage their production of placards with words that the press would actually be able to print!!

It was happening, and with Alison directing from the back of a motorbike, the faux Trump set off down 5th Ave with his flash mob of hundreds of bikini clad protesters. Powerless to stop them, the NYPD just had to let it happen, and this bizarre roadshow eventually rolled up to Trump Tower and a stern warning from security.

‘Do whatever on the pavement, but the second anyone comes over the threshold of this building we’re shutting things down and you’ll all be arrested.’

This jaw-dropping stunt had now become a ‘movement’, one they took to Times Square, then onto the gallery. ‘When you go and see an artist who has a style, who has something, has a following, you see just how big something can be. It kind of blew my mind.’ They got the shots, they made global news, and they did it all without anyone ending up in jail. Big moment captured, massive statement made, no-one clapped in irons.

Goldsmiths, Discovery Channel, New York, Alison Jackson, faux Trump. To everyone reading this - or listening to it - it sounds as though we must be talking about one of the most confident men on the planet. But Tim also has a role at Promax - a TV industry organisation - that involves him speaking at conferences around the world, and it might surprise you to hear that he gets really nervous every time he speaks.

‘Although I sound quite gobby on this recording, I actually get crippling nerves.’

He deals with these nerves by rehearsing and, perhaps more importantly, by not worrying about what people will think. ‘As soon as you stop caring, you will start achieving’ is speaker Tim’s mantra, based upon the belief that ‘nobody wants to see a robot, they want to see a real person with passion for their subject’. Seeing past the nerves, Tim knows that if he’s been asked to speak, he’s been asked because he’s good at something, and once again he resolves to simply live in the moment.

It’s this totally refreshing outlook on life that gave Tim the confidence - ‘the bravery’ - to found and launch his own successful business in 2017. Knowing how much difficulty people have in communicating precisely what they want to other people, and after being asked to write three briefs for a client, Tim realised there was a niche here, and one that perfectly fit not only his skill set, but

also what he loved to do.

Every successful creative project needs a good brief, and so ‘The Brief Doctor’ was born, designed to help people articulate exactly what they want to achieve from a project. ‘It’s not just arty farty please go and make me a beautiful advert’, it’s knowing who the audience is, what the business need is, and why the project is happening. Sounds simple, but so many projects fail because they

don’t have this approach in place.

‘It was just me as a consultant, with a good witty name to start off with, and it has grown with that.’

The business has gone from strength to strength, consulting on creative strategy, brand strategy, and facilitating the conversations that result in the commissioning of successful creative work. And it doesn’t stop there either, as Tim also holds workshops that help focus people on what their good at, and help them to work better together as teams. As he puts it so well himself, he helps people to ‘shine light on each other’.

The philosophy for this is that for most of us, 20% of our working day is spent on what we’re really good at, whilst the rest of the day is spent doing things that someone else could do better. Sound familiar? Tim explains that it’s a case of ‘finding your genius’, not in a smug or an arrogant way, but in a way that allows you to recognise what you do best, and to make that into your career - just like

the man himself in fact.

‘You have to live in the moment, I think that’s what people don’t do enough’

One of life’s lessons that Tim has taken from his late father, is that we should live in the moment, and we’re sure his dad would be extremely proud of how his talented son has done just that.

To hear this engaging and entertaining speaker talk about his journey so far, make sure you catch up with Tim’s episode on the ONEOFTHE8 podcast, its a truly fascinating story, told with the passion, enthusiasm and wit of man who has ‘found his genius’. You can also find out more about Tim’s work at ‘The Brief Doctor’ and see the results of faux Trumps 5th Avenue adventures with ‘Alison Jackson’.