Look up the dictionary definition of the word ‘adventure’ and you will find ‘an usual and exciting or daring experience’. Brave, bold, daring, a voyage of discovery, adventures manifest themselves in many, many different ways. For our guest on this episode of ONEOFTHE8, embarking on her adventure was motivated by a simple desire, to be near the beach again, and to be in the sunshine.

Sand there would be, lots of it in fact, plenty of warm sunshine too, but this adventure would turn out to be about so much more besides. It would become a life-changing journey of exceptance, connection and gratitude.

Growing up on the quiet and idyllic Channel Island of Jersey, Kelly Harvarde developed a life-long love of the beach, the sea and the sunshine, three things that were in pretty short supply when she left her loving and supportive family home for a university place in Sheffield (no offence Sheffield).

As a child Kelly was always fascinated by stories, writing them and reading them, and it was this fascination - along with her natural tendency to be nosey - that first led her to study journalism at university, and subsequently into a career in PR and communications in Manchester, where she worked alongside our ONEOFTHE8 co-founder.

Agency life and work was good, very good in fact, but there was still that hankering for warmer climes, and when an opportunity came along Kelly took it. Her then partner was heading to Dubai with his work, and she made the decision to go with him.

‘I wanted to be near the beach again, I wanted some sunshine.’

Despite being an only child and very close to her parents, Kelly didn’t feel any pressure not to go, as even in Manchester there was already a plane distance between them. In fact, on receiving a YouTube video from her daughter showing ‘a bit of dessert, a couple of camels and a falcon’, Kelly’s mum was still nothing but supportive. And so, some 12 years ago, the real adventure began, with a step into the unknown.

‘One of the bravest things I’ve ever done, because there was no social media then, there was no real way of knowing what I was stepping into.’

When the plane doors opened, Kelly stepped down onto the tarmac as was hit immediately by the incredible heat. The opposite of the rain she had just left behind, ‘it smelt like holiday’, although our adventurer had to remind herself that this wasn’t a holiday, this was her new life.

Dubai was very much a work in progress back then, ‘there was no Uber, no Google maps’, and ‘you could be driving down a road, you’d take a right turn and you’d just end up in a pile of sand’. It was a sweltering 52 degrees in the summer, the work ethic was one of 12 hour days, and for those first few months there were definitely moments of wondering ‘what I have done’, yet Kelly still somehow felt like she was born to live there.

‘There’s a feeling I have when I’m here that I’m very grounded and I’m exactly where I’m meant to be.’

Fast forward to today and Dubai is home for Kelly, it’s where she lives, loves, works and belongs, and it's where she and her photographer husband Alex are raising their daughter Aya in the multicultural community that the city has become.

‘Dubai is a huge melting pot, there’s about 200 nationalities here, there’s lots of different religions, and we all live happily and calmly together.’

Becoming part of this community has allowed Kelly to take valuable lessons from all of those around her, and to see that certain stereotypes are the complete opposite of what you actually experience. Religions co-exist happily side-by-side, Muslim, Christian, Hindu, and the similarities between them are many.

In February 2019 the Pope made an historic first visit to Dubai, filling a sports stadium with over 130,000 people. During this visit Pope Francis stood alongside an Imam, a priest and other religious leaders. Watching this with her daughter Aya, Kelly found it an incredibly moving and spiritual experience, inspiring her to write ‘Isn’t that what faith is? Choosing hope. Choosing love.’ This incredible moment in time had shown everyone that whatever each of these religions believe, there is something more that connects us all together.

‘There was something more that connected us, and it was a real moment of humanity for all of us.’

Kelly is quick to recognise the enormous benefits of bringing up Aya in such a multi-cultural environment. Attending a school where she learns about all religions, and where children of all nationalities celebrate ‘international day’, has meant that mixing together in this way has become ‘their normal’.

‘It gives me a lot of hope for the future that these kids are having such open minds and experiencing so many things.’

Living with a mosque right next to their house, Kelly, Alex, Aya - and their collection of cats and chickens - hear the call to prayer five times a day. Determined to know more about Muslim teachings and their perspective on life - there’s that journalistic nosiness again - Kelly discovered a fascinating parallel with todays increasing quest for mindfulness and meditation, and recognised that ’in a way, Islam has been getting people to do this for years’.

During this time Kelly became inspired by the charitable deeds and the ‘giving back’ that take place during Ramadan. A time of spiritual reflection and self-improvement, this month in the Islamic calendar is one of fasting, prayer, reflection and community, lasting 30 days. At sunset on each day Muslims end their daily fast with an evening meal called Iftar, and it is here that giving back to the community often takes the form of sharing food.

Enter the story of ‘Ramadan Sharing Fridges’, where something that started out as a grass roots initiative, showing small acts of kindness and respect for one another, has become a growing Dubai phenomenon. 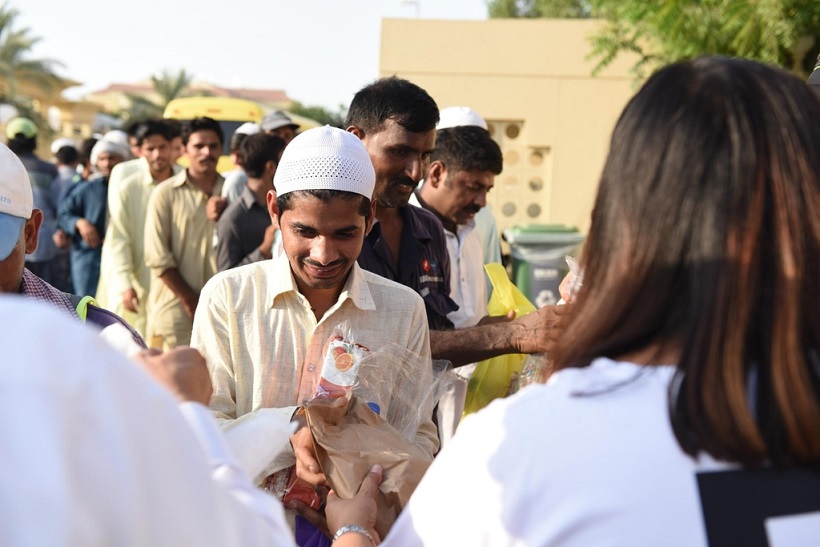 Whilst Kelly is quick to stress that she can take absolutely no credit for the idea itself, she and her family have certainly become committed contributors to the movement, where fridges are put outside homes and offices and stocked with cold drinks and food that everyone is encouraged to take. People returning from a hard days work in the city can help themselves whenever they’re passing.

Hearing about this Kelly began putting a fridge outside their home, and things began to snowball very quickly. So many people turned up that she soon realised they would need more pairs of hands to prepare for the next day, and the next day, and the next day. This is where ‘old school’ marketing and social media now worked together seamlessly, as Alex and Aya made flyers appealing for help and handed them out around the neighbourhood, and Kelly posted messages on Facebook and Instagram.

It worked a treat, as suddenly people started to turn up to help, people they had never met before, complete strangers, with arms full of food and drink, even a truck full arrived. What was made available for sharing quickly outgrew the fridge - that was now kept for just cold water - and day after day people arrived to sit in Kelly’s garden and make up packs of food.

What began as a fridge outside the house became a movement that brought the entire community together for 30 days of really hard work and sharing that Kelly describes as ‘an absolute joy’. Feeding over a thousand people a night was an incredible demonstration of the power of community and the power of connection, proving that ‘when you ask people for help they will give it, people are essentially good’.

It will be no surprise to learn then that our guest has now taken her unquenchable thirst for learning even more about people’s search for greater meaning, connection and purpose in life one stage further, by launching her own podcast.

On the ‘The Good Intensions Podcast’ Kelly connects with experts on numerous subjects including social impact, psychology, and growth, and aims to provide listeners with a different way of looking at things, something than can inspire us all. There’s a link to the podcast at the end of this story, and we strongly recommend you give it a listen.

So an adventure that set out to reconnect with the sea and the sand, led to so much more. It became a journey of the human spirit, inspired by the people of a city Kelly describes as ‘very much a place about giving, about kindness’, a place with a ‘can do attitude, and a law of tolerence’. In Dubai it seems, there is a lesson for us all.

To discover more about her life in Dubai, her belief in human connection, and the culture that she has embraced so warmly, be sure to catch up with Kelly’s episode on the ONEOFTHE8 podcast. You can also hear more from Kelly on ‘The Good Intentions Podcast’ and follow her on Instagram @kellyharvarde.