I, as a Cancerian who has lived by the coast for nearly all of my life, love water beyond words. I drink at least three litres of the stuff every single day, it’s where I go to clear my thoughts when I need a mental cool down, and it’s what I plunge into with a good book when I want to be surrounded by nothing but soapy suds and the aroma of Lush’s Snow Fairy bath bomb. So, albeit on an entirely different scale and spectrum, I can totally relate to our next guest’s insatiable desire to always be close to water and whenever possible, beneath its glittering and beguiling surface.

Growing up with dreams of being an astronaut, life’s journey went in an entirely different direction for Jill Heinerth - Canadian cave diver, underwater cinematographer and photographer, explorer, author, motivational speaker and all-round awe-inspiring human. As a fellow female, she has also left a buzz of inspiration with me that I don’t think will be shifting any time soon, transforming the future for women within the world of cave diving. A true honour to be hosting Jill and chatting with her from across the Atlantic, we talk: the crossover between creativity and science, the interconnectivity of all human beings, how cave exploration can educate future generations, and why the world’s waters need nurturing now more than ever.

Jill has produced content for National Geographic, was one of the first people to ever dive inside an Antarctic iceberg and has published her own book on how to face fear - but where did it all begin? “I was always that curious kid, out making her own entertainment”, she tells us, reminiscing about her childhood in Toronto, stitched together from a tapestry of outdoor adventures, hiking with family, and hours poring over an encyclopaedia, cultivating an affinity with science and adventure.

As the years passed, Jill’s “desire to explore where no-one has ever gone before” expanded inside her like a stomach-rumbling hunger that could never be satisfied. At university, Jill studied Fine Art - a specialism which, on first glance, seems rather at odds with the science and exploration she has become renowned for, but perhaps not quite so contrapuntal on inspection. It was this string of creativity within her DNA though that no doubt lead to her career in underwater camerawork, both still and in motion.

“Being in a creative field really encouraged my exploration” and hey, “a left brain person mixed with right brain scientist gives us a lot of fun opportunities” after all. The first time Jill dipped her toes into the world of scuba diving - quite literally - was actually during her time at university. She saved up her money and invested it into some scuba diving classes, a course which involved her instructor taking the students into a cavern during an open water weekend. A pinnacle moment in Jill’s life, which “opened [her[ eyes to the possibilities of cave diving”.

“My business card says ‘Explorer’, and I think that’s the best way to describe what I do”

Jill grew up in the sixties, when life might have been swinging in some ways but certainly wasn’t so swell on the female equality front. As a young adult, she watched men walk around on the moon and other such astonishing accomplishments, always a stark reminder that their female counterparts didn’t have access to the same kinds of opportunities. Of course, women in history went onto to rewrite the narrative - Jill cites Roberta Bondar who in 1992, was the first female astronaut and first neurologist to fly to space. However, the career Jill has today and the spread of accolades she is decorated with was nothing short of fantasy during her youth and young adulthood.

Today, her business card reads ‘Explorer’ and “I think that’s the best way to describe what I do”, Jill tells us, but what is it that makes a bonafide explorer? You can’t have just been there apparently, you have to have made a map and documented a survey of somewhere before you can truly say you have explored it.

In 1995, following a series of expeditions with Dr Bill Stone (engineer, explorer and lead of the United States deep caving team) Heinerth and Stone decided to create a 3D mapping device. The device would allow for unprecedented accuracy when recording 3D cave dimensions and marrying them with surface topography. To you and I, it meant that people would be able to walk over the surface of the earth and precisely know where water-filled conduits lay beneath their feet. Something which hadn’t yet been achieved in recorded history.

Two years later, concept became reality. In 1997, the 3D mapping machine embarked on a successful pilot dive in Florida and is now a fully autonomous, artificially intelligent, robot cave diver championed by NASA. For Jill though (any many others, no doubt) there is still “always a place for the human brain and eyes in cave exploration” - and always will be.

“If we always run from fear, we’ll never ever explore or discover anything new for ourselves or for the planet”

A quick Google search of Jill Heinerth will tell you how she was one of the first people to ever dive inside an iceberg in the Antarctic in human history but we wanted to delve deeper and find out more about this momentous expedition. “We planned a one hour dive that eventually became a three-hour fight for our lives”, she tells us and it all began with a 12-hour ocean crossing to reach the Ross Sea ice shelf, from New Zealand to Antarctica. The deepest dives were about 40m deep in biting cold water at around -1.8°C (almost freezing). 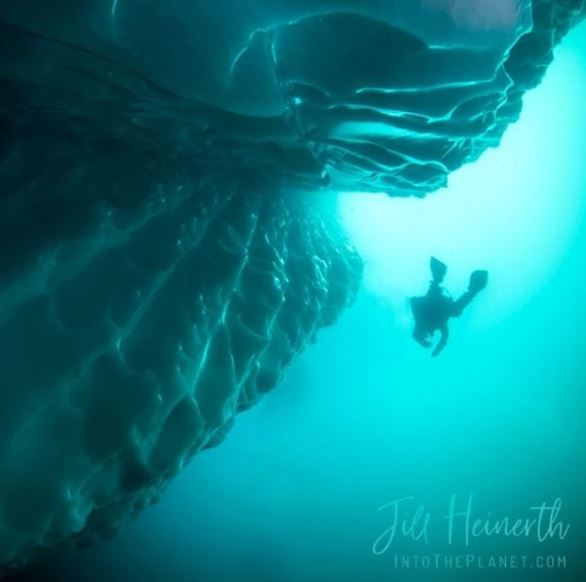 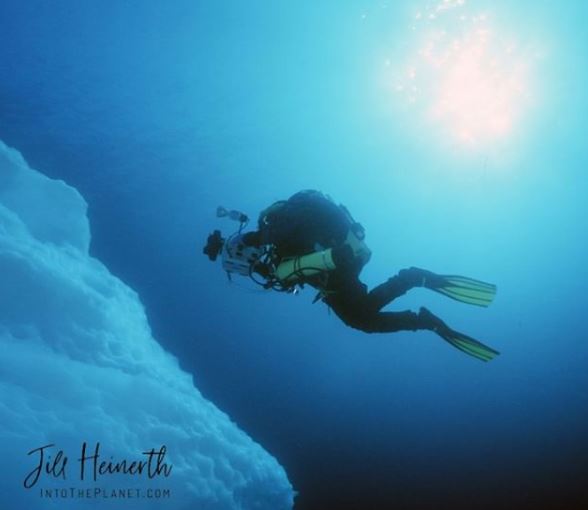 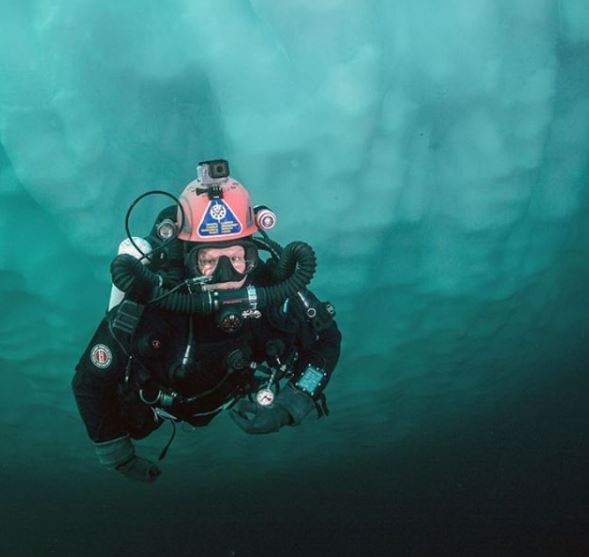 During the dive there were a few diversions from the meticulous plan and a lot of what Jill now reflects on as ‘close calls’. Diving during a phase of the moon which caused violent currents, swimming against the water was almost impossible. Jill and her intrepid comrades even became trapped at one point inside the iceberg, blocked by a chunk of ice which had tumbled down and concealed their exit. Surfacing two hours later than planned, after the current slackened, the team caught their breath and just minutes later, witnessed the iceberg they had just been inside explode into shards, slush and smithereens as far as the eye could see. Regularly living the kind of stuff you only expect to see in movies, we just had to gain some insight how Jill deals with fear and panic. “That’s really what exploration is about - just pushing the envelope of our understanding”, she so calmly comments, explaining how “it’s important that we all embrace fear and step towards it as opposed to running away from it. If we always run from fear, we’ll never ever explore or discover anything new for ourselves or for the planet”. (There’s more on this topic in Jill’s book, Into the Planet.)

Our planet is not just something Jill sees as her playground, it’s something she holds very close to her heart and particularly, the preservation of the world’s waters. “Water is really the important issue of our next generation - where it is, how we might be unintentionally polluting it or over using it, and how we can conserve these ground water resources that nourish so much on the planet”, she so rightly tells us. 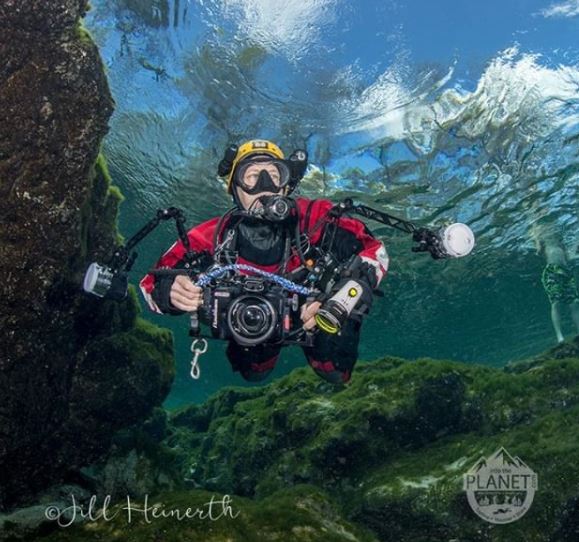 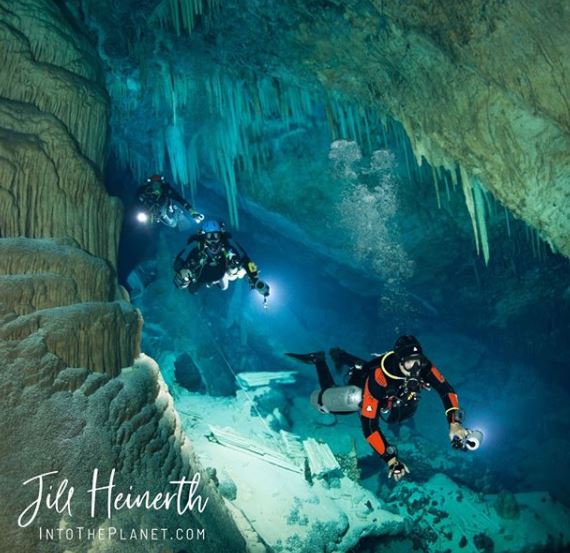 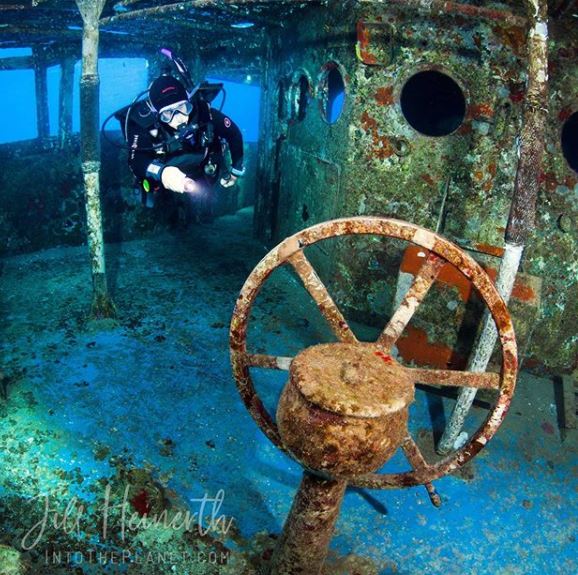 Jill has dived down into the ancient remains of Mayan civilisation, observing how they used water in both spiritual ceremony and life sustenance - just one example of how her research of the past could influence a better future for our planet and the people on it. This kind of information equips explorers like Jill with knowledge to impart to help protect against things like pollution, global warming, watershed, plasticisation of our waters and the extinction of vulnerable and endangered species.

“That’s maybe the most important thing I do in life, inspire the next 10 year old”

Water is something which connects us all. We are all ONEOFTHE8 and we all require water to live and therefore we all have a part to play in protecting the planet we live on. “Everybody needs to understand that they are a truly a global citizen and that problems on the other side of the planet will affect us. So, therefore, we have to a part of things like ensuring that basic access to clean water and sanitation is a human right, and should be a human right for all in order to avoid a world of conflict”, Jill beautifully summarises towards the end of our conversation. Some food for thought to leave with you as a takeaway from our incredible guest.

Before we (reluctantly) ended our fascinating chinwag with Jill, we asked her what her proudest moment was so far. It might have been winning the Canadian Polar Medal, being immortalised in the International Divers Hall of Fame, being the first ever female to be awarded The Explorer’s Club William Beebe Prize for Ocean Exploration, or being an instrumental part of the scholarship and mentorship opportunities which are now available to aspiring young female divers. However, what Jill concludes is perhaps the most important thing she has and continues to do in life is “inspire the next 10 year old”. She has certainly inspired this 29-year-old too.

To purchase a copy of Jill’s book, Into the Planet click here, or stay up to date with her aquatic adventures and see more of her incredible photography by following @jillheinerth on Instagram. To hear more about Jill’s life so far and how she is paving the way for the next generation of female cave divers, catch up with her episode on the ONEOFTHE8 podcast.