Craig Black - Changing The World One Person At A Time

For most of us, changing the world seems like a really nice idea. A romantic concept which we’d jump at the chance of being part of if it didn’t quite seem like such an overwhelming task. There are almost 8 billion people on our planet - making the world a better place for us all just seems like an impossible undertaking best left to those with more power at their fingertips. What about if we all narrowed our focus a little though and just dedicated ourselves to making the world more beautiful for just one person at a time? Imagine the different this would make.

In our latest ONEOFTHE8 story, we catch up with graphic designer, lettering artist, international speaker and ex-professional footballer, Craig Black who also just so happens to be a really great guy. We explore how his dreams turned from sporting fame to social change after a chance meeting with his old art & design teacher in the pub one Saturday afternoon. We talk happiness, fulfilment and the responsibility each of us has to breed more positive thought in the world around us.

Like so many young lads, Craig Black always dreamt of becoming a footballer - “putting on a blue shirt and running out at Ibrox” he recounts in his thick Glaswegian accent. For many, this dream dissipates as the grip of real life takes hold but for Craig, his childhood fantasy became a teenage reality. He ended up playing professional football at the age of 16, during a time when “design didn’t even come into [his] head” but in retrospect, paid way more meticulous interest in the design of footy strips than his peers did.

Determined to not let his education fall short on account of his sporting commitments, Craig spent his mid-teens training football in the morning and studying art & design at school during the afternoons. It was here he met Mr Murray - a teacher who would leave quite the impression on Craig’s life and a source of inspiration still to this day. It was a bond built on tough love and mutual respect, pushing him to become bigger and better than he’d ever been before - something still clearly ever-present in Craig today.

The world works in mysterious and magical ways and whether you see it as destiny or coincidence, life threw Craig and Mr Murray back together later on at just the right time. Craig had continued balancing football and his creative studies for five years but eventually had to walk away from the immense pressures of sport. The “politics of football” and everything that came embroiled were causing Craig to be unsettled and unhappy as he watched his dream “getting taken away from [him] by other people”.

Taking a stand against his melancholy for something which had once brought him so much joy, Craig left his position in professional football. He did this on a Friday and on the Saturday, just so happened to visit a local pub at the same time as his former teacher. Conversations led to Mr Murray putting Craig in touch with a graphic design lecturer with whom he met on Monday and was being educated by on Tuesday. Craig recalls clutching a folder full of his old artwork from six years ago but remembers how: “I instantly fell in love with graphic design - and I mean instantly”.

Jumping back into the world of creativity after such a substantial stint on the pitch was a challenge for Craig but one to which he showed nothing but grit and perseverance. Lettering and typography work was one of his most demanding endeavours during the course but something that would quite literally go on to shape his adult life. “There’s something about a challenge that I thrive on - it makes me want to become better at it”, and so he did. Craig’s lettering work went on to see him winning awards and starting a career down in the Big Smoke - the beating heart of the UK creative industry at the time.

“People need to find what makes them happy in life then don’t let go, and pursue that”

His first job in London mainly revolved around motion design - something Craig enjoyed learning but wasn’t exactly set alight by. The fire in his belly came during evenings and weekends when he would practice “his craft” in letter work, “experimenting to find the stuff which was making [him] happy”. Passion breeds passion and through sharing this experimental work on social media, Craig began to gain traction in freelance jobs, likening every gig he got to scoring a goal back on the football pitch. Again, the pressures of yet another balancing act between synchronised commitments led Craig to reevaluate his life. 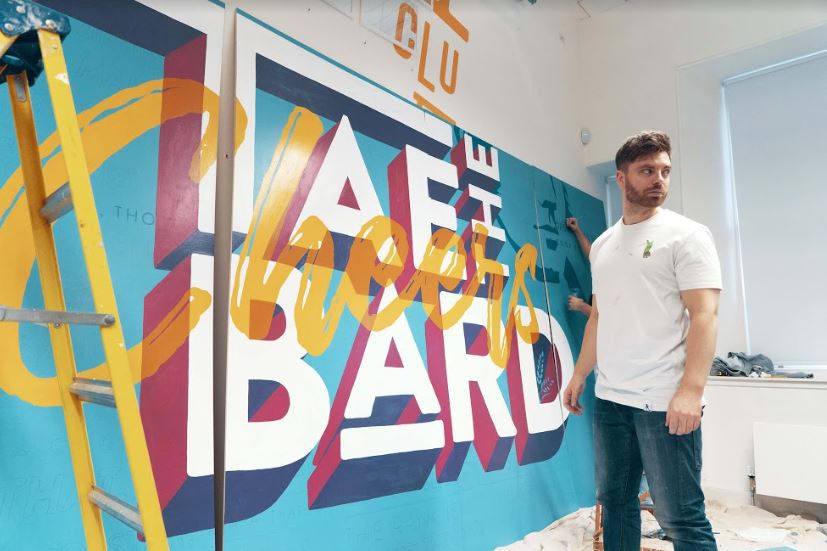 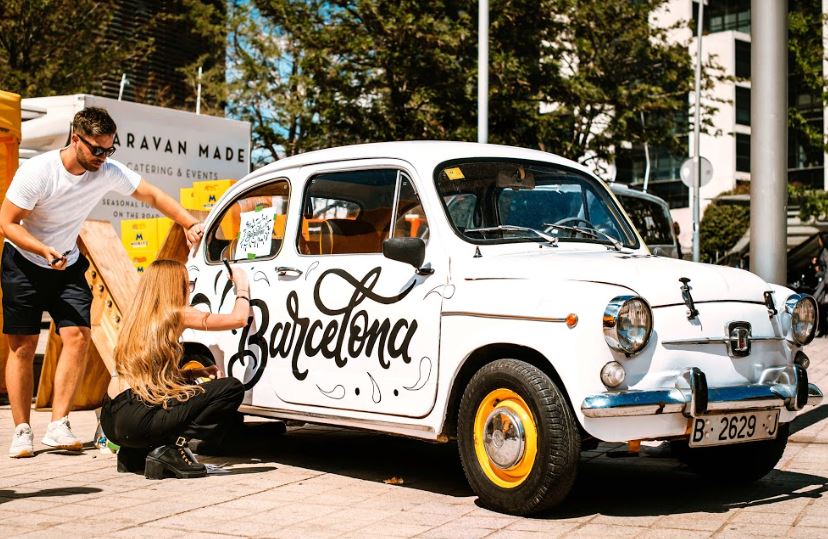 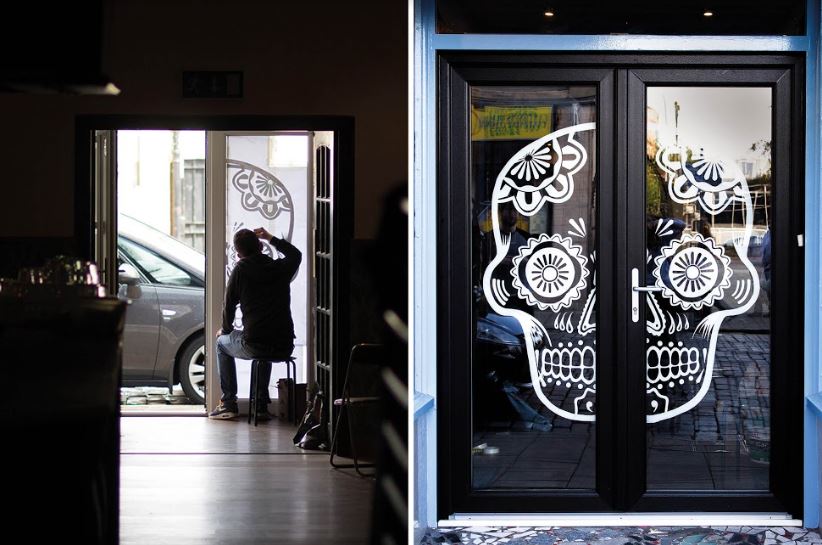 The verdict? A desire for more control and a sense of autonomous responsibility and with one month’s rent in his bank and a pocket full of fearlessness and self-belief, Craig said: “F*ck this, I’m going to start my own business and be an independent” because “huge risks equal huge rewards”. Capitalising on his digital connections and gung-ho dynamism, Craig launched his own self practice which would later lead him back home to a studio in Glasgow after becoming exhausted with the big bright lights of the city.

In between all of this though, Craig met Ali - a newly-graduated mental health nurse who would later become the “beautiful wife” he had always imagined in his dedicated to visualisation and positive affirmations. For years and years, Craig envisioned his life with this beautiful wife, a family back in his hometown, a home studio with clients all across the world and being in a position to make an impact, bring about positive change and help others through becoming an inspirational figure along the way. Today, Craig tells us, “it’s all a reality and I’m literally living the best life possible” and how for him, “happiness is the key to life” and when he’s happy is when he is “producing the best work [he] could possibly do”.

“You’ve got a responsibility to be positive around other people”

Craig’s talent is raw and clear to anybody who happens upon his portfolio but by his own admission, his true calling comes in the public speaking and ‘giving back’ it has allowed him to be a part of. “With all my heart, I genuinely believe I can change the world and I have done since I was a kid” - an ethos which makes Craig’s global speaking so compelling. Following a public speaking tour in Australia, where he spoke in six different cities, Craig returned home to set up his own social enterprise with the aim of supporting others and bringing Scotland’s creative community back together.

The development of his social enterprise - or “movement” as he refers to it - led him to collaborating on a philanthropic project with his wife, Ali at the prison she was working at as a mental health nurse. With his two co-founders, Craig put together a workshop with 15 male inmates, designed to give prisoners a voice and encourage expression through art. He fondly reminisces about how the workshop fostered unprecedented collaboration and communication between the men, with two of the youngest later going on to pursue studies in graphic design following their release.

“Changing the world doesn’t necessarily have to be this big massive monumental thing you have to conquer. I believe if you can make a difference in someone’s life - one person’s life - to change for the positive or the better - then that’s changing the world”

One of Craig’s greatest beliefs and an instrumental part of his mantra for changing the world one person at a time is that we all have “a responsibility to be positive around other people”. Attitudes, dispositions, perspectives, moods, outlooks… whatever you want to call it, they all have a domino effect and whether that cycle around you is a positive one or a negative one is very much dictated by what you personally imbue in the world.

Craig tells us how a visible transformation in his nearest and dearest pays testament to this theory, becoming touchingly emotional about how he has managed to improve the outlook of his friends and close family. He tells us how “in a world that’s full of negativity […] it takes more to be positive and stand up for what you believe in”, in order to “make the world a better place and help others”.

So, it’s safe to say that Craig Black would be the name on many, many people’s lips when asked who or what their greatest source of inspiration is but as with all ONEOFTHE8 guests, we turned this question on Mr Black himself…

“I could say loads of design people but no-one compares to those two for me” and here, he refers to his mum and his older brother who he fondly refers to (with tears in his eyes and a lump in his throat) as his “hero”. Both were empowering pillars in Craig’s upbringing, instilling a sense of support, devotion and encouragement to which he believes he owes his life.

So often here at ONEOFTHE8 we find that family is at the root of all inspiration and as the saying goes, ‘charity starts at home’ but what about changing the world? Perhaps the best place to start making those incremental improvements that will one day transform the world we live in is with the people closest to you, both at home and in your heart.

To find out more about our professional footballer turned professional positive vibe spreader, make sure to catch up on Craig’s episode on the ONEOFTHE8 podcast. Here, he delves deeper into why he feel so deeply in love with lettering, the force of visualisation and positive affirmations in his success, and how he reclaimed his dream. Also, take a look at some of his distinctive and beautiful work via his website.