Aaron Fitzgerald - Head In The Clouds, Feet On The Ground

In this installment of our real life stories from real world people, we’re chuffed to have secured some airtime with one pretty incredible human: Aaron Fitzgerald. It’s not the kind of airtime he’s used to as a helicopter pilot, aerobatic daredevil and former paratrooper so it’s a true pleasure and an honour to be stealing some of his precious time back down on the ground.

You may or may not already be familiar with Aaron Fitzgerald. I mean, you should be, but unless you’ve studied film and TV credits at close quarters, you could be forgiven for not recognising him by name. Now a member of the Red Bull aerobatics team, The Flying Bulls and founder of his own aerial production company with two Emmy nominations and a BAFTA under his belt, Aaron Fitzgerald is a pretty big deal in the world of aviation and entertainment.

But how did a kid from “the small town of Wenatchee”, Washington come to be such a fully fledged superstar?

Actually, it all started right there in Wenatchee. It’s a city in north-central Washington surrounded by mountains and forestry so Aaron spent a great deal of his tender youth marvelling at the helicopters and airborne fire-fighters overhead. “I had a pretty good air show going on most of my childhood […] so I think that had something to do with me gravitating towards flight”, he tells us - but that would be just the beginning.

His first ever flight was at the age of 14. It was a ride in a jet ranger over San Francisco, around the bay where Alcatraz prison sits. “Everyone else was looking out the window and I was looking inside, watching the pilot and looking at all the instruments and trying to figure out how that thing worked. I was just fascinated by it”, Aaron recalls. A year later, at the age of 15, he enrolled on an aviation class at school and flew himself for the first time. The rest, as they say, is history.

“Everyone else was looking out the window and I was looking inside, watching the pilot and looking at all the instruments and trying to figure out how that thing worked”

Aaron’s aviation class didn’t lead straight to his career in flight though - there was a diversion along the way in the shape of dreams to become a professional hockey player. Aaron tells us how he moved to Canada to pursue his sporting ambition but having “ran out of talent”, decided to join the military instead. From where we’re standing, we’d say it was less of a running out of talent and more of a reconfiguring, but you’ll see that for yourself as we continue.

Aaron joined the army through a responsibility for feeling that he should do but didn’t actually end up going into combat. He was a peacetime soldier, artillery specialist and paratrooper after being enlisted into the division which trained its members to parachute into war. After his stint in the military, life led Aaron to civilian flight school in Long Beach, California, which eventually landed him a job in flying news helicopters for over nine years.

“It’s a combination of being creative but also being very, very disciplined”

Aaron’s career as a news helicopter pilot for sports and entertainment broadcasting, as well as TV and film pushed him to learning the ropes of simultaneously operating camera equipment as well as an in-flight vehicle. Fast forward to today and he now owns his own aerial production company, Airborne Images, working in television, cinema and providing aerial support for big stunts on and off screen. He recently worked with world-famous magician, David Blaine on his most ambitious feat yet: jumping from 20,000 ft attached to nothing but 52 helium balloons. 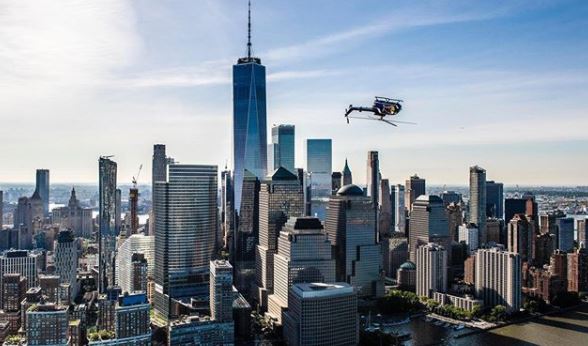 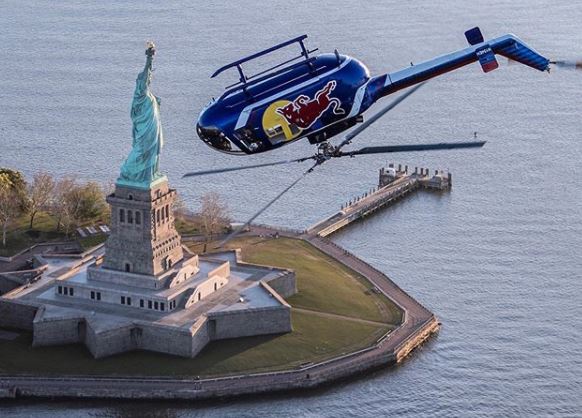 Aaron’s name can be found in the credits of hundreds of films and TV shows but when asked which has to be his favourite, he rapidly responds with Extraction. Released earlier this year on Netflix, the action-thriller starring Chris Hemsworth is about as blood-pumping as it gets. Aaron and his trusty team spent a while in Thailand co-ordinating stunts, test flying, carrying out aerial camerawork to shoot gunfire, pyro and some of the most nail-biting stunts on screen. If you haven’t seen the film yet, whatever you do, just get the final bridge fight scene up on YouTube and prepare to be stunned.

Working alongside David Blaine and Chris Hemsworth are but an etch on the surface of Aaron’s bragging rights. We spoke to him about the Space Jump project he worked on in 2012 with notorious skydiver and BASE jumper, Felix Baumgartner who Wikipedia dubs the “Austrian daredevil”. It was a seven-year project, most of which was worked on in secrecy, which saw Baumgartner successfully free fall 128,000 ft (that’s 24 miles) from the stratosphere, allowing Aaron to become an integral part of human history.

He talks with zealous nostalgia about the unforgettable first day he turned up to the job in California City to see Baumgartner stood there all clad in space gear. It was then that Aaron “figured out this was not a normal project”, proceeding to drop the stuntman from thousands of feet high whilst operating camera equipment and an oxygen tank borrowed from an ambulance driver on set.

“I was soaked completely in jet fuel and blood”

We could chat (and write) for hours about the astonishing work Aaron has been a part of… The 2016 Heaven Sent project working out mathematical equations to drop his friend (and stuntman) Luke Aikins from 25,000 ft high into a net with no parachute. The Paper Airplane Project alongside Mark Thompson who was briefed with building the world’s largest paper airplane, coming in at 43 ft long and 1,000 lb, flown from 4ft altitude in the Arizonian desert. The inverted flight over New York City in 2019 with Red Bull where Aaron became the performer, showing off aerobatics at 500ft over the Hudson River, “smiling the whole time”.

He truly is a remarkable human but what is perhaps most charming about Aaron Fitzgerald is how humble he is about it all. Always quick to reference his teammates and colleagues, declaring himself “only the helicopter pilot” on more than one occasion (only?!) and even downplaying his heroic act of saving two friends from the burning wreckage of a crashed helicopter after it went into hydraulic failure. “I was soaked completely in jet fuel and blood”, he tell us but still, whilst his head is often high up in the clouds, Aarons feet remain firmly on the ground, remaining down to earth whilst miles up in the air on his “illusive” and ongoing “chase for perfection”. Aaron closed our chat by saying: “I’m not done yet - there’s still a lot ahead of us that I want to do” and we don’t doubt that for one single second.

To see more photographs and videos of Aaron’s adrenaline-pumping aerobatic adventures, make sure you’re following him on Instagram @aaronfitzgerald105. To hear more about his accomplished career with the glitterati of aviation and everything that led up to it, catch up with his episode on the ONEOFTHE8 podcast.